"Sri Lanka - Leopard Dynasty" to be launched in Cannes this year

Our wildlife documentary "Sri Lanka - Leopard Dynasty" will be launched at MIPTV in Cannes this year. The film was acquired by the German company 'Autentic' for global distribution in 2022. This is our 3rd wildlife documentary production to reach the international stage. "Sri Lanka - Leopard Dynasty" will be presented to various international broadcasters during the event, which is held annually in France. 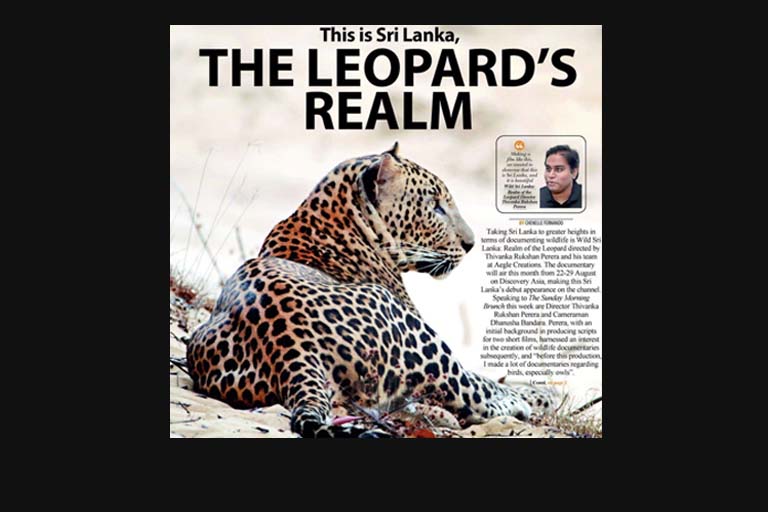 WILD SRI LANKA - REALM OF THE LEOPARD”, a Sri Lankan made wildlife documentary film, will air on Discovery Asia Channel over 18 countries including Singapore, Malaysia, Thailand, North Korea, Philippine, Vietnam from this August 22nd - 29th. This wildlife film depicts the life style of the Sri Lankan leopard, a subspecies unique to Sri Lanka, and highlights the potential hazards and environmental threats they face in the wild. The documentary, "WILD SRI LANKA - REALM OF THE LEOPARD," which spans over 50 minutes, captures breathtaking visuals of Sri Lanka's natural beauty and wildlife. 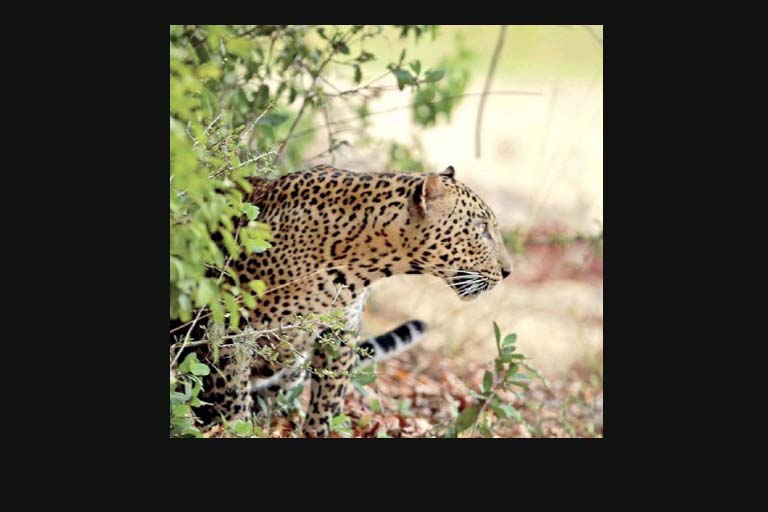 The documentary is the first local wildlife production to be broadcast on Discovery channel and the first to find international distribution.

The documentary film, produced by local production company Aegle Creations and directed by Thivanka Rukshan Perera, was previously aired on Discovery (Asia) and Viasat Nature earlier this year. Aegle Creations (Pvt) Limited has presented several Special promotional videos for Sri Lankan Airline’s In-Flight Entertainment and Sri Lanka Tourism authorities. They given liberal access to all their productions and even donated some for promotional activities. 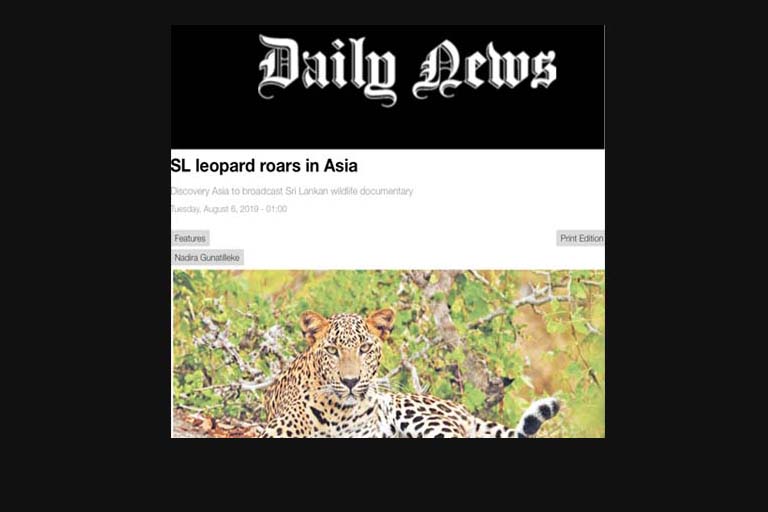 The wildlife documentary film, Wild Sri Lanka - Realm of the Leopard, aired on Discovery Asia for the first time from August 22 to 29 in South East Asia.

The film produced by Sri Lankan based production company, Aegle Creations (Pvt) Ltd took over two years to complete. The writer, as well as the director of the film, is Thivanka Rukshan Perera. This wildlife film depicts the lifestyle of the Sri Lankan leopard, a subspecies unique to Sri Lanka, and highlights the potential hazards and environmental threats faced by them. The documentary, Wild Sri Lanka - Realm of the Leopard, around 50 minutes in length, captures breathtaking visuals of Sri Lanka’s natural beauty and wildlife. 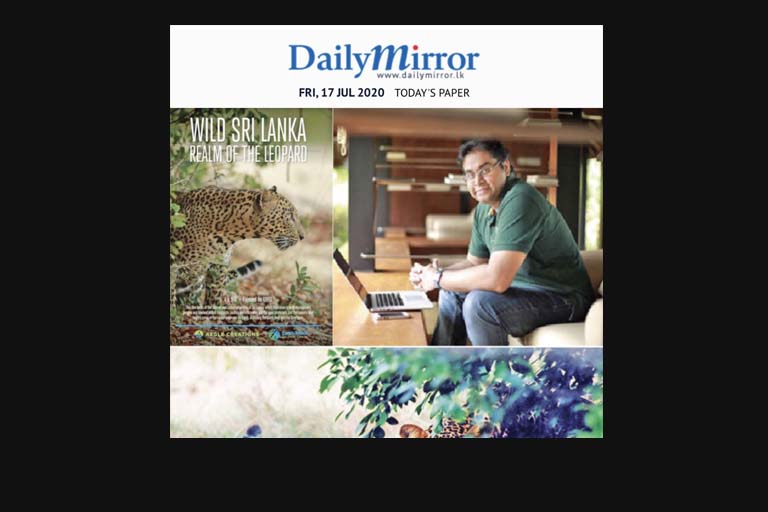 The Sri Lankan leopard (Panthera pardus kotiya) has been classified as endangered by the IUCN and is a leopard subspecies that is native to Sri Lanka.

This film looks at the diverse and colourful wildlife of Sri Lanka, which flourishes in both the highland jungles and lowland plains. Leopards, jackals and crocodiles are the apex predators, but the country also boasts some of the rarest creatures on Earth, including the Sloth Bear and the Grey Loris. 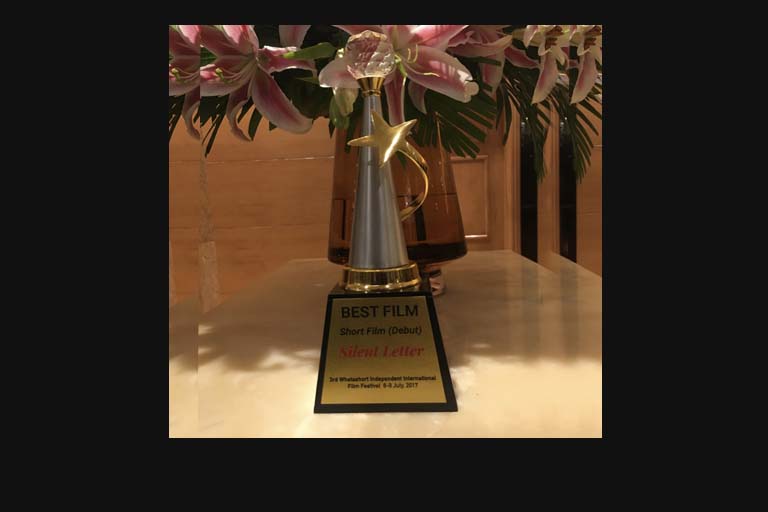 The festival, was held at Instituto Cervantes, was announced open by Carlos Varona Narvion, Director of Instituto Cervantes, Jatin Sarna, Bollywood and theater artist and Whatashort Founder Ravie Solanky. Earlier this month "Silent Letter" bagged several awards including Best Short Film (Debut) award at Whatashort Independent International Film Festival (WIIFF). It is a rare opportunity that a short film trying to explore social issues. Thivanka Rukshan Perera's "Silent Letter" is such unique attempt. The film is centered on a poor, low-caste boy from a rural village in Sri Lanka, attempts to escape to the city with terrible consequences. 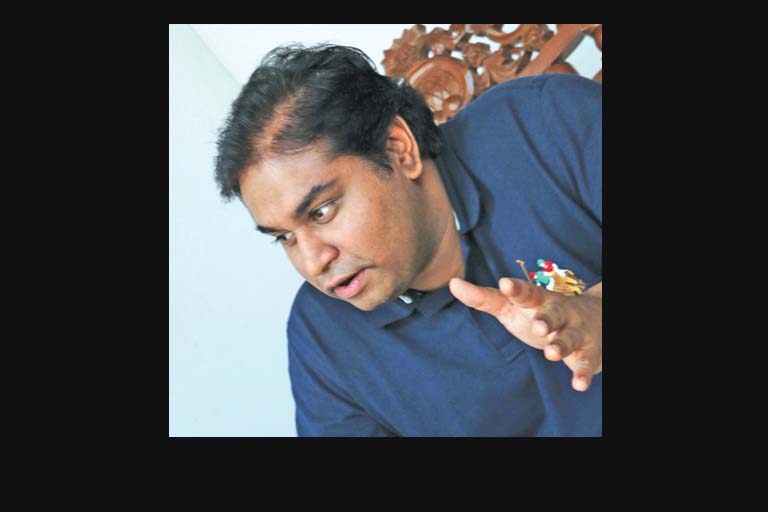 ‘Silent Letter’ won the award for his work out of over 400 entries from 34 countries. Directed by seasoned actor Kamal Addararachchi, the script and production of the short film was by Thivanka. The story rotates around a low caste young lad to tries to escape into the city life and meets devastating consequences. It was picked for distribution by ‘Shorts International’ and was broadcast in USA this year. It also clinched a certificate of excellence at the Fifth Mumbai Shorts International Film Festival in Mumbai, India, last year. 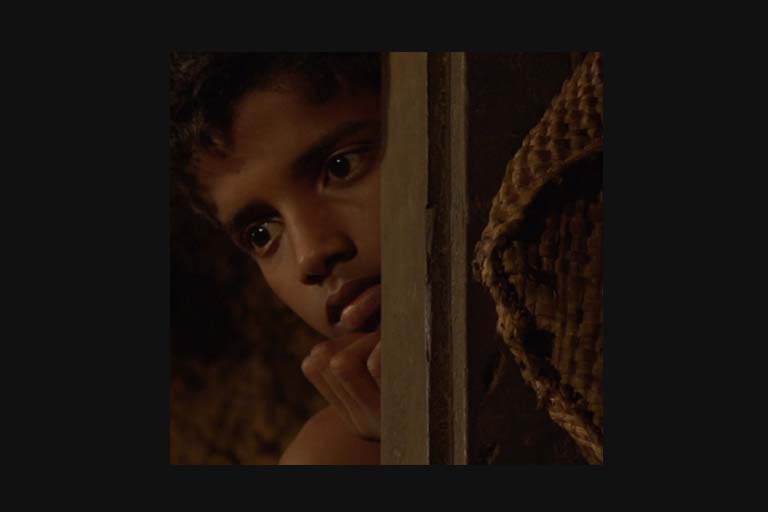 Social discourses is a seldom topic in feature movies. It is a rare opportunity that a short film trying to explore social issues. Thivanka Rukshan Perera's "Silent Letter" is such unique attempt. The film is centered on a poor, low-caste boy from a rural village in Sri Lanka, attempts to escape to the city with terrible consequences. 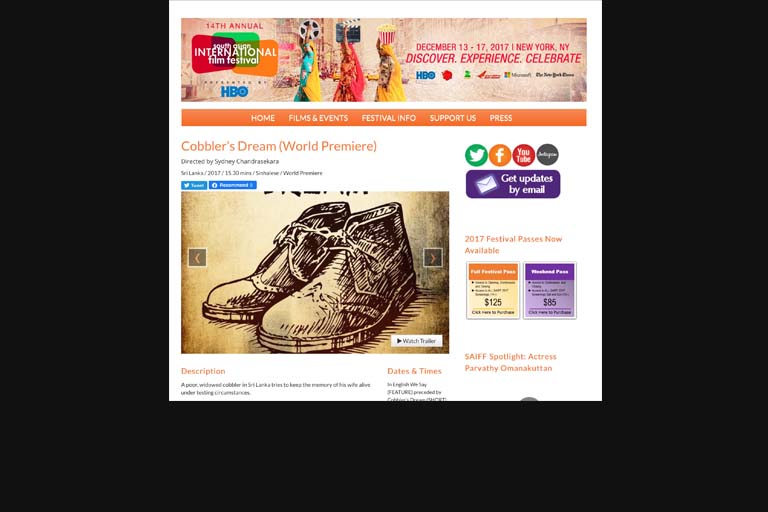 A short film about a poor, widowed cobbler who tries to keep the memory of his wife alive under testing circumstances. New York. It is a cautionary piece about not taking life for granted, especially those people who make up its main parts. Written by Thivanka R. Perera. “beautifully shot fable about the impermanence of life” (Short Film Review by Chris Olson :UK Film Review). “Cobbler’s Dream” is picked up for distribution by ‘Shorts International’ in Europe, Middle East and Asia. 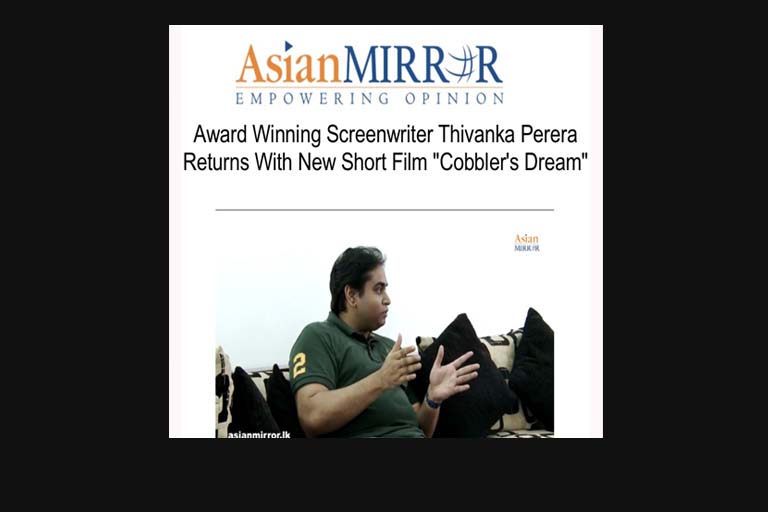 “Cobbler's Dream” is newest short film by the Award WinningScreenwriter Thivanka Perera. It unveils the story of a poor, widowed cobbler who tries to keep the memory of his wife alive under testing circumstances. Movie was picked up for distribution by'SHORTS TV' (2017 - Europe, Middle East, and Asia) 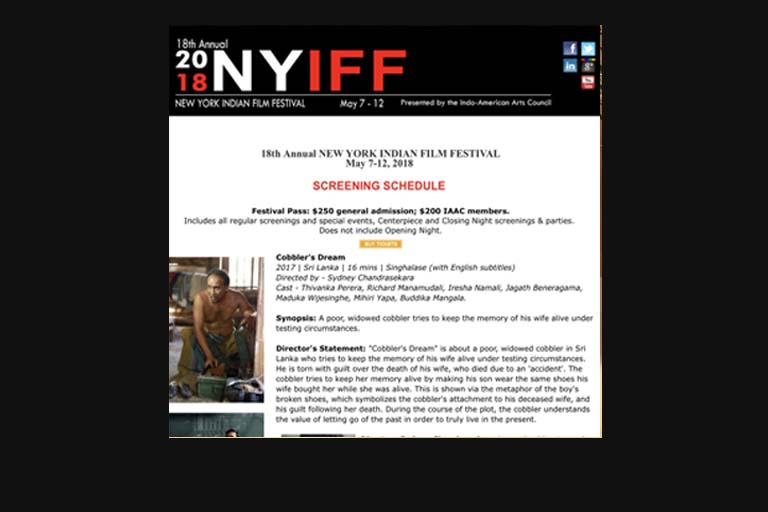 A cobbler, torn with guilt over the death of his wife, who died due to an 'accident'. tries to keep her memory alive by making his son wear the same shoes his wife bought her while she was alive. This is shown via the metaphor of the boy's broken shoes, which symbolizes the cobbler's attachment to his deceased wife, and his guilt following her death. During the course of the plot, the cobbler understands the value of letting go of the past in order to truly live in the present. 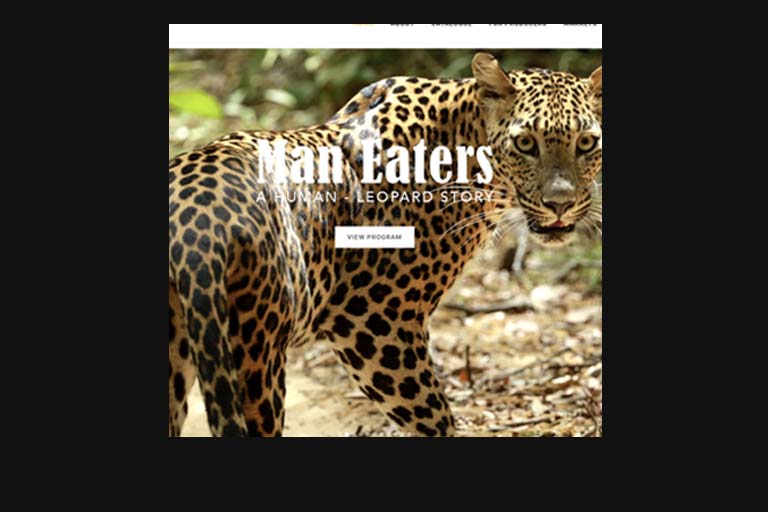 The first documentary about the Human-leopard conflict in Sri Lanka, “Man Eaters: A Human Leopard Story” approaches the conflict by analyzing past and present cases of man-eating leopards in Sri Lanka and what led to their strange behavior. Unlike India, man-eating leopards in Sri Lanka are very rare. But by tracing some prominent cases of man-eaters – such as the notorious ‘Man-eater of Punanai’ that killed over 20 people back in the 1920s – this documentary presents a compelling narrative about a conflict that will only escalate in future…unless measures are taken to prevent it..

The Kuala Lumpur Eco Film Festival (KLEFF) is Malaysia’s first and longest-serving platform promoting sustainable living through showcases of environmentally-themed films and programs. In the month of October, KLEFF hosts the screening of more than 50 films reaching to an audience of more than 5,000. With the collaboration of partners and sponsors, KLEFF is gradually becoming the nation’s celebrated grassroots cultural and environmental event. 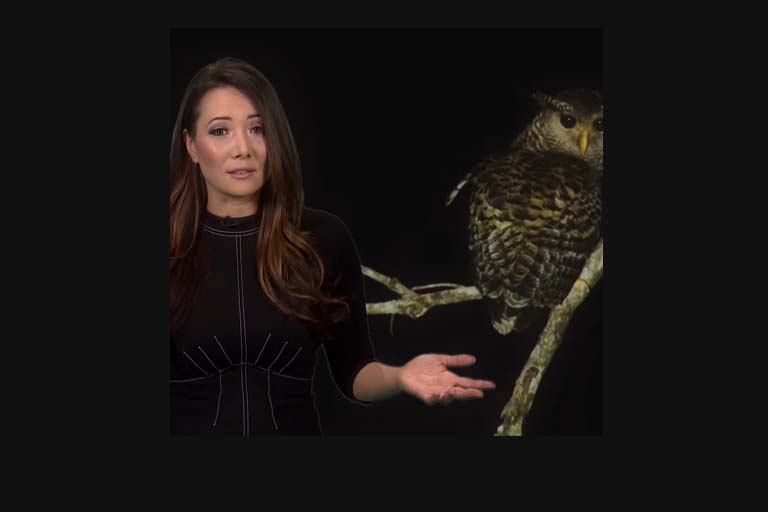 Discovery (Canada) Broadcasts a segment of ‘DEVIL BIRD OF SRI LANKA’ in their TV Program Daily Planet - Ziology - Mythical Creatures around the world. (2017)

And it was the very first documentary made about the 'Devil Bird' of Sri Lanka. The footage was also featured on Discovery Channel's 'Daily Planet' series, where they did a segment about mythical creatures around the world.

VOICE OF THE NIGHT - DOCUMENTARY 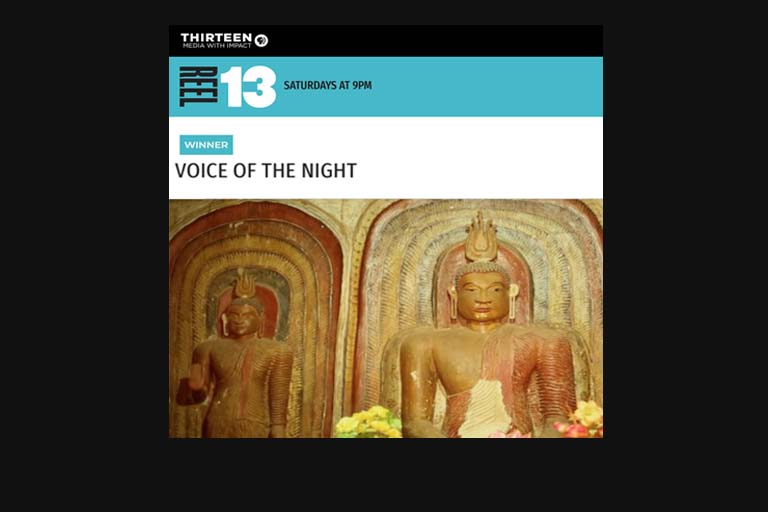 WINNER at the 'REEL 13' short film contest and was publicly broadcast on WNET/Channel 13 in New York City, USA in August, 2018.

A short documentary investigating the myth of the Sri Lankan “Devil Bird,” whose terrifying nocturnal call is believed to be an omen of death. It is a follow-up documentary to the popular viral video, "The Devil Bird of Sri Lanka" 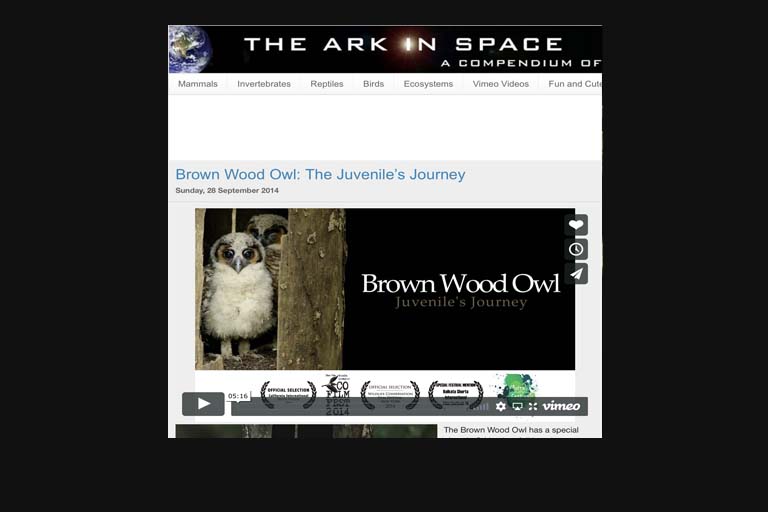 This is a story about two juvenile owls discovered accidentally in a crevice of a tree . Their behaviour, hardships and obstacles were chronicled after filming them for three weeks. The resulting short film tells the story of survival against all the odds and while the ending is not a completely one, this reflects the way that nature operates.

Check out our work
Portfolio
F I L M S